We will be closed for Thanksgiving to spend time with our friends and families. We hope you all have a wonderful Thanksgiving!

We will be opening up early on Friday the 29th at 9:00 am until 7:00 pm with our Black Friday special of 10% off of any black item in the store! This stacks with our usual referral and military (active or former) discount!

We also encourage everyone to shop small this Saturday the 30th at 9:00 am until 7:00 pm for Small Business Saturday at the Des Moines New Age Shop & Community Center! We look forward to seeing you there!

Finally, as we continue to celebrate the holiday season will be open our regular Sunday hours on December 1st from 12:00 pm to 5:00 pm!

Hey All,
Weekly guidance spread coming at you from #desmoinesnewageshop!!!
We are having a switch up for you this, Dennis (our in shop #tarot reader) is doing the weekly pull this time 🙂 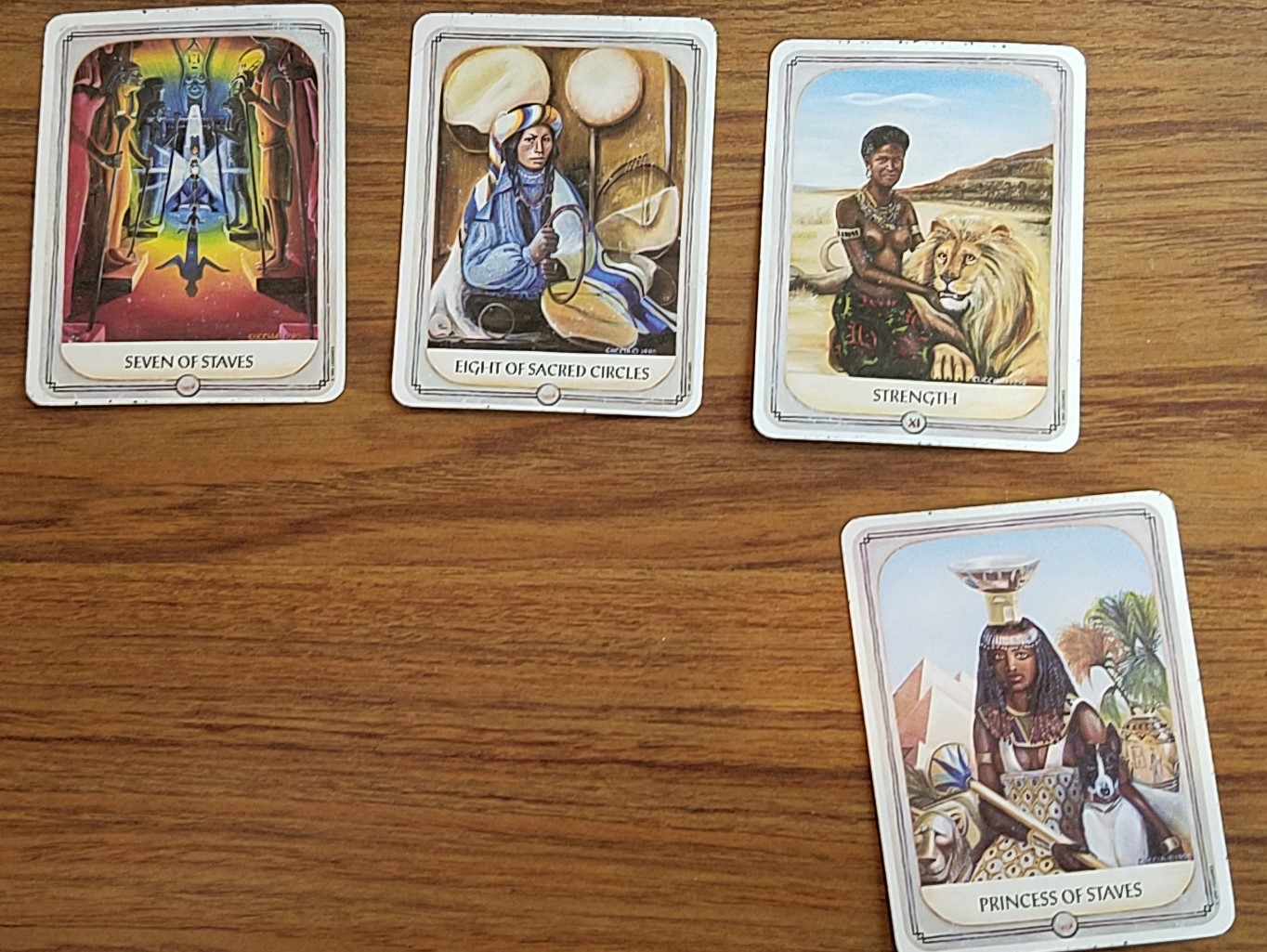 1. 7 of staves – Induction into the mysteries and the coming together of experience. Achieving goals by synthesizing the experience of the past and accepting the gifts of a higher power.

2. 8 of Pentacles – Time to roll up our sleeves and get our hands dirty. We will be learning a new craft as we venture out from our own personal environments into the larger world.

3. Strength – Going into the world at large may seem scary, but we know we will be fine because the Strength card indicates have the ability to persevere any challenge presented to us.

*He is using the #ancestralpathtarot, which he has been reading with for 21 years 🙂

Hey folks, Spirit Guide Basics has been rescheduled to Oct 12 due to the teacher( Alicia) not being fully mended from Bronchitis. Our apologies folks, we appreciate your patience!

The #desmoinesnewageshop is vending out at the #desmoinesrenaissancefaire here in in #johnston
(2977 NW 66th Avenue
Des Moines, IA 50313)

Saturday-Sunday & Monday (10am to 6pm everday) , there is Soooooo Much great energy here!!!

Thanks to the Lovely & Talented Antoinette of #spiralhealingenergies – she will be available for consultations , #reiki & #energywork #energyhealing

*and Hubby Dennis is getting back to his #scottish roots with abit of cosplay !!!!!!

Due to this article being ridiculously long, I am breaking it up into 3 parts-possibly 4 depending on what I decide to include in part 3. That said, lets dive into a subject matter that is bit creepy in nature. remember the motto when dealing with any of the darker parts of the metaphysical arena is “Be prepared, Never scared!”.

Some people choose to call it a negative entity, a wandering spirit, a low vibration entity. It is colloquially called an Attachment.

This Particular critter falls under the same umbrella as Energetic Tags, Miasma, Energy parasites, Psychic vampires, Possession, etc….it all falls under the Metaphysical category of spiritual crap you don’t want anywhere near your spiritual energy field.

In this article, I’m going to break down the differences between the items above, and in a follow-up Article I will give you some diagnostic techniques(to find out if you are being influenced or affected by these pesky critters) , also some protective techniques……..Simply because this article will be crazy long otherwise!

*These are some basic know hows & techniques, There is far more information then could fit a plethora of articles and the classes that I offer…. so keep digging on this subject if you feel so inclined or if you have questions that I didn’t answer here, its a subject whose depths are infinitely explorable-you can also message me on Des Moines New Age Shop facebook page messenger, I always welcome feedback

Attachments – A human spirit who is either trapped or just plain refuses to move on to their place of final judgement (Any human spirit who has not moved on is pretty much here as an illegal alien, as they have no place here. Final judgement helps them go to where they ACTUALLY BELONG, and allows them to evolve and grow as a soul).These generally feed on negative human emotion-Hungry? , find a burger king type of situation- so they will attach to a person who has their particular flavor of energy- grief, fear, lust, anger, etc- and feed and then they will influence and entice the person into staying in that head-space that will create more of the entities food supply. They are great farmers, lols !!!

Energetic cords- The cord of energy created by people, one to another. Energy, thoughts, feelings, personality traits, memories, sensations can be passed through these cords from one person to the other and vice versa. Cords involuntarily form between people that have close interactions over time or have a dramatic experience- a quick connect so to speak. Unless you enjoy the person to which you are corded, practice cord-cutting daily so as to release any crap from other people. When to worry is when someone is cording to you intentionally, when you are unaware of the cord forming/existing and they are able to drain energy from you- these are called energetic tags. *Also physical and mental illnesses can be passed along through energetic cords.

Miasma- A build-up of energy that is so strong that it leads to the power being able to be felt by anyone who is mildly sensitive to any non-sensitives who pass by. When its a negative miasma, it will feel icky, as though the place is unclean and filthy even if its completely spotless – it will look and feel SLIMY.

Energy parasites- These guys and Psychic vampires have a great deal in common. TheMain difference is that an energetic parasite will stick with you. These fuckers stick around forever and keep feeding on you, eventually becoming extremely reliant upon their energy providers.

Psychic vampire- a Psychic vampire should actually be called an Energy Vampire. This is a person who has figured out either Consciously or unconsciously how to siphon energy from other people/animals, and anyone can do this- but ya really shouldn’t. The unconscious PV generally comes upon the skill when they are in the throes of a wasting illness(Cancer, etc), one that exhausts their own natural energy and necessitates them to garner it from somewhere else as a matter of survival- siphon or die. In this case, its a survival mechanism, and there aren’t a lot of good resources to teach you to turn it off afterwards. The second kind of PV is far more icky. These people Siphon energy from others for a number of stupid reasons(Power, pleasure, entitlement,etc), but it is a luxury not a necessity. It amounts to a kind of rape, as they are taking something vital from someone else without that persons permission and potentially hurting them in the process. Now I do feel the need to mention, There are people who only siphon if its absolutely necessary(too tired to drive but have to make it home, too tired to work but cant lose the job, etc), and they try to be responsible about it. Psychic Vampirism is not a free pass, if a PV is not VERY careful they can end up siphoning mental -physical-emotional illnesses from their “Snacks”. All of which is contained in the energy patterns of said “Snacks”. Now the PV could just suck more energy to heal whatever issues they run across, but its a lot of work and in the meantime they could end up very very sick. Feed and move on.

Negative entity takeover– A little bit like a possession, but they cant quite get in all the way. There is still some of the person/takeoveree in there wanting out. Think of it like someone else driving your car without your permission and you still having a few fingers on the wheel.

Possession– When a supernatural entity makes a living human being their host. The person in question either voluntarily or by means of long-term influencing has given up their body or the will to control their body. *This can happen at any age(infant to elderly) if a negative attachment is not gotten rid of. It all depends on the motivation & type of the NEA that is being dealt with.

Now that we have covered Terms, In the next part of this article we will cover the dicier part ….. Diagnosis !

Which will be in the next article 😀

There is alot more information on the darker side of the Metaphysical area, and sifting through whats true and whats complete fiction is a soul wrenching process, quite worthwhile though.

“Don’t take my word for it, Get out there and research it!!”

Fresh in:
New #crystal shipment came in at #desmoinesnewageshop !!!

Fresh in:
RESTOCK!!!! We have #restocked our selection of rough #blacktourmaline & #blackkyanite fans at #desmoinesnewageshop !!!!!

*Black tourmaline is an ABSOLUTE MUST for all #empath ‘s who deal with the public in ANY way(gotta make sure to have #whiteselenite on hand too), it is an empathic blocker -it works like a sponge,absorbing the empathic vibrations coming your way and then the selenite “wrings” it out. (Just restocked a ton of White selenite too!)

*Black Kyanite is a really awesome chakra aligner and Auric field hole filler, its wonderful for flushing out those vibes that just WONT go away!!!

These are some lovely pieces with a ton of zap to them!!!