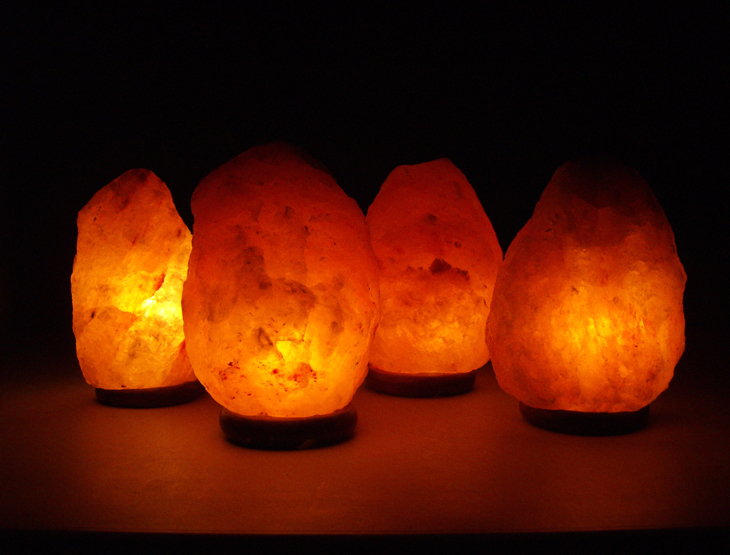 Ok,
HSL’s (Himalayan Salt Lamps) have experienced a huge boom in the last 2 years, everyone wants one, has one, needs another.
In my personal experience, These things are a HUGE help.
You don’t know what you’re missing if you’ve never slept or sat by a Himalayan salt lamp. It’s like having an open window – a softly glowing natural source of fresh, clean air – on your desk, in your living room, next to the bed, or anywhere you decide to put it.
How does it work?
The warmth of the candle or light bulb reacts with the natural crystal salt, releasing negative ions into the air.
Nifty factoid:
Looking at the light also boosts your serotonin ( thought to be a contributor to feelings of well-being and happiness) level making it easier to sleep, concentrate, and meditate.
On a strictly energetic level, Himalayan Salt Lamps are a great cleaner.
They cleanse & purify the environment around them.
And it is still salt, It is awesome for keeping negative stuff out of your space.
“It’s just a big chunk of salt with a light bulb inside, I’m skeptical on all of these health benefits that I see advertised?” you might say…….
No worries, I was too.
And yes and no, it IS a big ol’ chunk o salt…..but its also a little more complicated than a big block of salt with a bulb inside.
Himalayan salt lamps purify air through the power of hygroscopy ((of a substance tending to absorb moisture from the air, relating to humidity or its measurement.) , meaning that they attract water molecules from the surrounding environment and then absorb those molecules – as well as any foreign particles they may be carrying – into the salt crystal.
As the  Himalayan Salt Lamp warms up from the heat produced by the light bulb or candle inside, that same water then evaporates back into the air and the trapped particles of dust, pollen, smoke, etc remain locked in the salt.
Nifty, Hunh?
What are the benefits?
Here are a few of the benefits (just punch Himalayan Salt  into google and you can read a ton of articles on the lamps, the salt, the shot glasses, the cutting boards, etc):
How big of a lamp do I need for my home?
The equation is roughly 1 pound of Himalayan Salt for every 2 square feet of an environment.
Below are some of the more popular sizes of Himalayan Salt Lamps and the area that they cover:

40-50 lbs. salt lamp — 30×30 sq. feet (joined rooms & commercial spaces)
How can I tell if I have a fake on my hands?
(yup, just like everything else in the world people have stooped to faking salt lamps, the sadness in this is epic)
Here are a few signs to watch for:
*Its very light colored and is stupidly cheap
White Himalayan salt is harder to come by than the usual pink that you see everywhere. Genuine white Himalayan salt lamps tend to cost several times as much as regular ones.
White Himalayan salt lamps are the preferred variety for detoxification and healing by some schools of energy healers. For everyone else, the Pink variety is gonna be awesome
*Its very heavy but lights up the entire room.
When a Himalayan salt lamp exceeds roughly 20 pounds, it is not going to give off light in a uniform pattern That’s just the nature of the creature.
So, If you have a large  Himalayan Salt Lamp that lights up your entire bedroom without any striations, a pretty & effective lamp for sure, but not an actual Himalayan Salt Lamp.
*It doesn’t break or crumble, no matter what
Himalayan salt lamps tend to be fragile. And are very poorly affected by moisture and humidity (they start sweating and condensating, then you have moist salt dust-its gross).
So if you’ve dropped yours, put it in a steamy bathroom, or the shipping box has arrived rather roughed over. But the lamp looks good as new, its a quality piece of merchandise, but it’s not a Himalayan Salt Lamp.
*The Lamp Handles Moisture Well
Genuine Himalayan salt manufacturers recommend that their products be placed in a cool, dry area. That’s because the salt will absorb any moisture around it and begin to shrink.  You can test your lamp by taking a damp cloth and gently rubbing the lamp. The part of the cloth you’ve rubbed should have noticeable discoloration and the lamp should look like it’s “weeping.”
*You don’t experience any changes
All of your life’s problems are not going to be solved by a Himalayan salt lamp.
(But it would be super nice right lols!!)
But after a couple weeks of using one in your home, you should notice a few differences. One of them being a more content feeling, the other a noticeably better nights sleep.
Should I get one?
I don’t know, that’s up to you.
Personally, I have one in almost every room of my house, no bathrooms (Because I want mine to have a nice long life )due to the humidity(Its still hardened salt after all), and the effects are very noticeable.
I am more at peace, I sleep better, I have fewer allergy symptoms, I find meditation easier, I am more focused, I concentrate easier ( And that is saying sumthin with a 13-month-old lol).
I will warn that if you have a bunch of them all lite up, some people have related stories of the lamps having a drying effect. I haven’t experienced this but, I got one for my Mom and she said her eyes dried out.
*Side note:
As I type this up, I am sitting in my shop with 8 of them on. And IT IS GREAT!!!!!!!!
****But don’t just take my word for it, get out there and research it!****
~Alicia Anspaugh-Mccullough, DMNAS